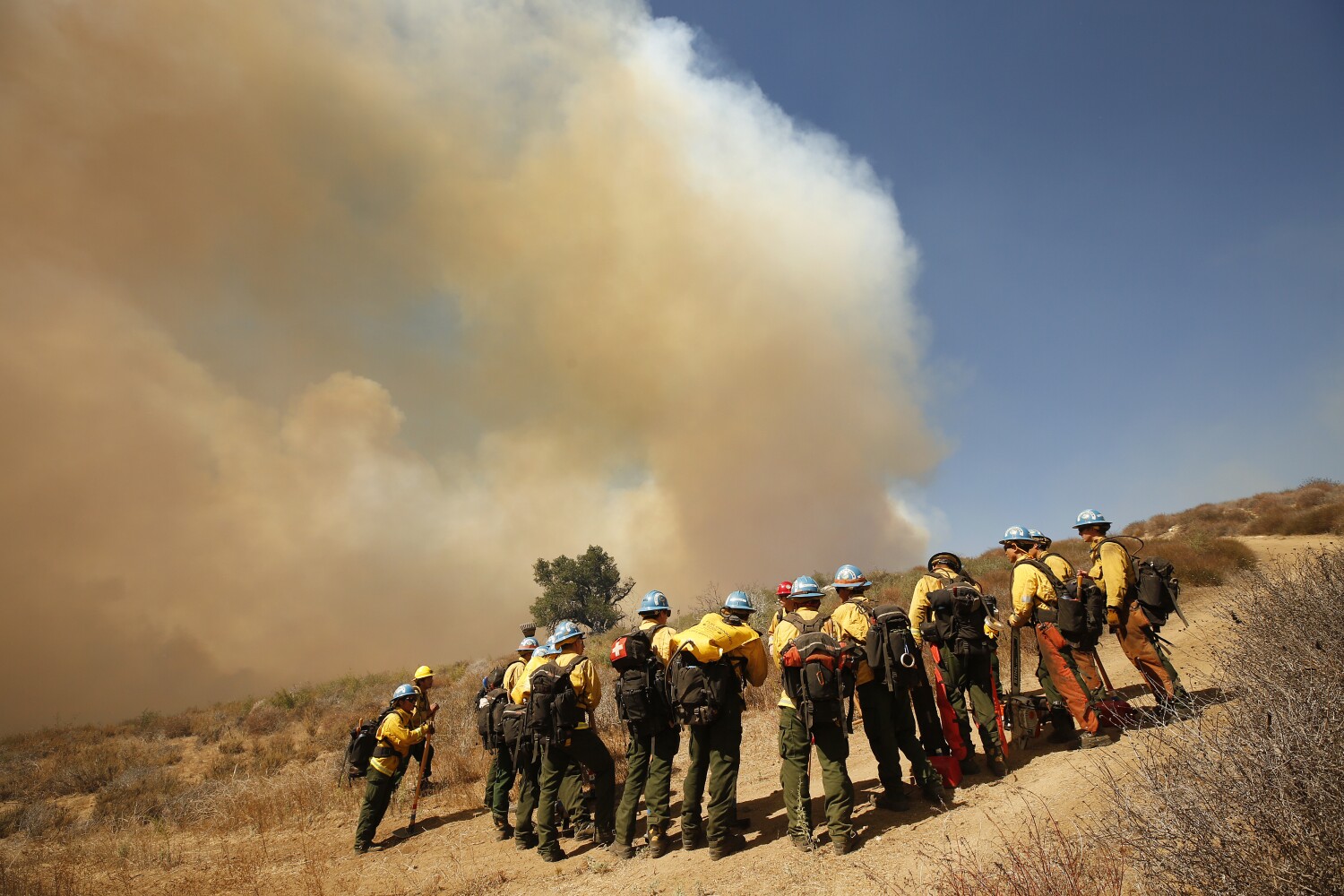 Strong, dry offshore winds — including Santa Anas and sundowners — are forecast to arrive in California this week, prompting fire warnings and potential power shutoffs for 29,000 residents across 19 counties.

From Los Angeles to Solano counties, gusty northerly winds are expected to arrive beginning Thursday, colliding in some places with the twin fire hazards of single-digit humidity and bone-dry vegetation, weather officials said.

The winds could spark new fires and fan the Alisal blaze in Santa Barbara County, which exploded to more than 14,000 acres in two days amid fierce gusts.

There, the danger will escalate Wednesday evening, when sundowner winds, named for their tendency to peak around sunset, are forecast to increase over the burn area.

Gusts could reach up to 40 mph after 6 p.m. and remain ferocious until around 2 a.m., when they’re expected to calm down, according to the National Weather Service.

The fire area will be “kind of treacherous,” said Mike Wofford, meteorologist with the weather service’s Oxnard station. It’s the first major fire to scorch Southern California this year, and officials fear a season of flames is just beginning.

Santa Anas are expected to hit portions of Los Angeles and Ventura counties on Thursday night, though it’s not yet clear how strong the winds will be.

Models show the potential for a weak to moderate event, with wind speeds reaching 30 to 40 mph, said David Sweet, another meteorologist with the Oxnard station.

Humidity will hover at a parched 10% or below. Temperatures for the warmest areas — including the San Gabriel and San Fernando Valleys — could range from the mid-80s to mid-90s.

The fire risk is “definitely a concern,” Sweet said, adding that extended critical conditions could prompt a red flag warning.

In parts of central and northern California, strong winds will arrive as vegetation remains historically dry.

A red flag warning for the western Sacramento Valley and Delta region will go into effect 10 a.m. Thursday and last through 8 p.m.

Winds are forecast to blow between 20 to 30 mph, weather officials said.

Though the winds won’t be extreme, the historically dry terrain is “still quite susceptible” to ignition, said Eric Kurth, a meteorologist with the weather service’s Sacramento office. “Any fire starts, we could see rapid growth.”

Several fires erupted earlier in the week, when winds hit a large swath of the state’s northern interior region, but were quickly contained, he said.

The windy forecast prompted Pacific Gas & Electric to announce possible power shutoffs for 29,000 customers in 19 counties and three tribal regions in an effort to reduce the risk of fire.

About 9,870 of those customers lost power earlier this week during a separate planned shutoff that began Monday, said Deanna Contreras, a spokesperson for PG&E.

The utility will notify customers at least two hours before the shutoffs go forward, in addition to 24- and 48-hour warnings.

In August, the utility cut power for tens of thousands of people as the massive Dixie fire raged. There were six shutoffs last year.

PG&E has said its equipment may have sparked the Dixie fire, which broke out July 13 near where a tree fell into a power line.

The utility’s equipment may also have ignited the Fly fire, a blaze that eventually merged with Dixie.