This year’s Orionid meteor shower will peak in the moonlight early Thursday morning.

According to NASA, the Orionids are active in the night sky annually from around Oct. 2 to Nov. 7. The meteors come from the debris trail of Halley’s comet, through which the Earth passes this time of year, and radiate from the Orion constellation (the shower’s namesake).

The Orionids “are considered to be one of the most beautiful showers of the year,” writes NASA, adding that they’re known for brightness and speed – traveling at about 148,000 mph. “Fast meteors can leave glowing ‘trains’ (incandescent bits of debris in the wake of the meteor) which last for several seconds to minutes.”

The American Meteor Society says that the Orionid meteor shower of 2021 will peak Wednesday night and early Thursday. In most years, from an ideally dark location, you may see an average of 10 to 20 Orionids per hour at their peak. In extraordinary years, like 2006-2009, rates have been on par with the Perseids (50 to 75 meteors per hour). But those numbers aren’t likely this week.

Visibility will difficult because of the full “Hunter’s Moon,” which will coincide with the Orionids’ peak. And current rates are expected to be about five meteors an hour.

Draconid meteor shower:See stars ‘fly throughout the sky’ when the ‘dragon’ sparks

More:A meteorite slammed into her house, barely missing grandmother’s head while she slept

“The Orionids are going to, frankly, suck this year … the moon will be up all night, from sunset to sunrise,” NASA meteor expert Bill Cooke told Space.com last week.

If the moonlight gets in the way of viewing of the Orionids’ peak this year though, never fear. There are other meteor showers to look forward to in the coming months – including the Southern Taurids, Northern Taurids and Leonids, which all peak throughout November. 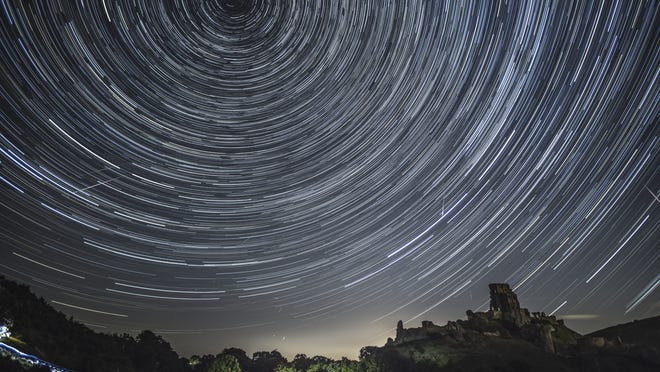