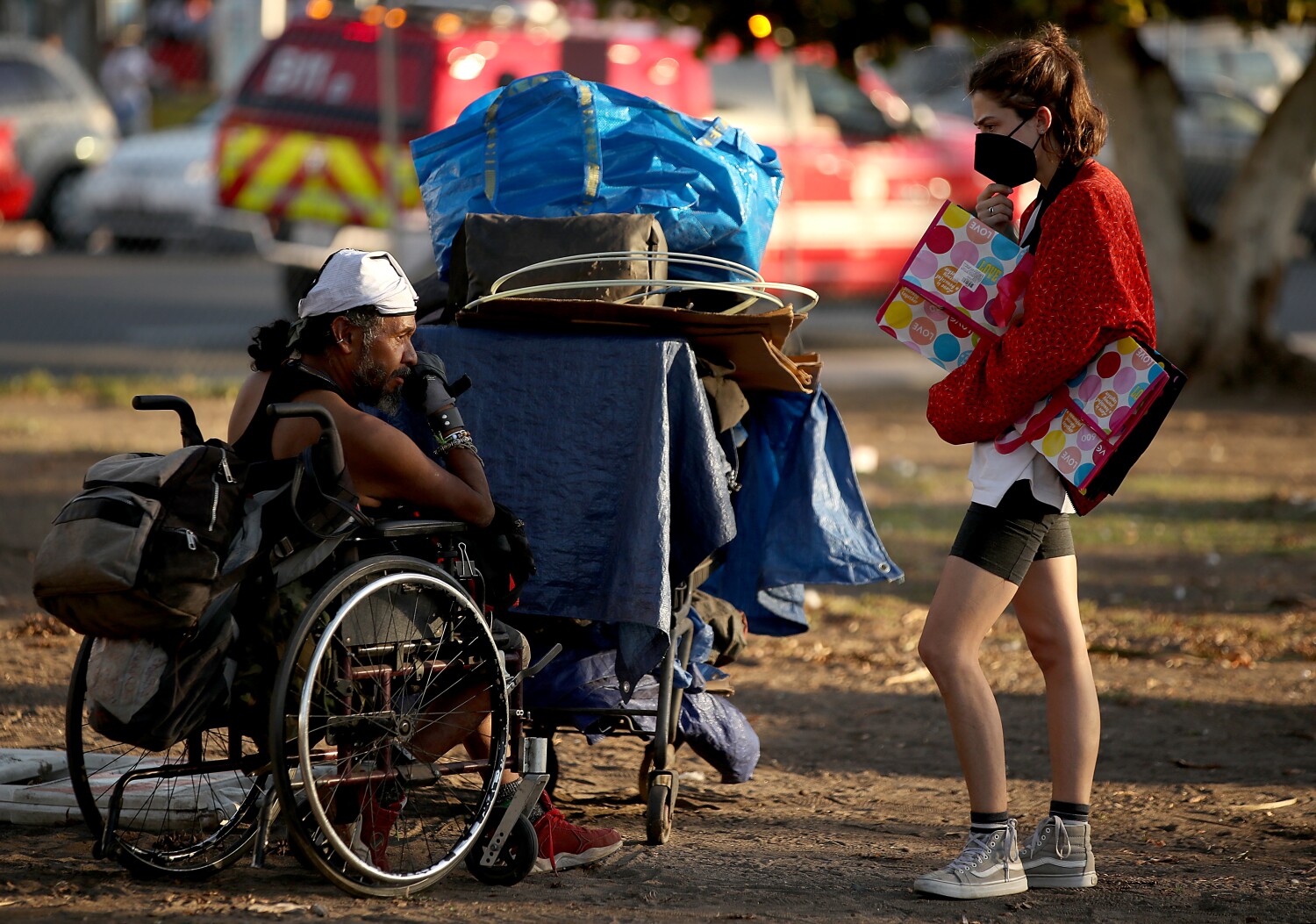 Despite weeks of fears over violent confrontations and resistance, nightfall came quietly to MacArthur Park on Friday.

The park, just west of downtown Los Angeles, will close for 10 weeks beginning at 10:30 p.m. — the culmination of a 10-month project to guide homeless people living in tents around the park toward housing and supportive services.

Encircled by a chain-link fence, the park’s southern half was clear of the tents that had once crowded its eastern edge. Within the fencing, a few people slept on stone benches. Signs affixed to the barrier stated that the park was temporarily closed for renovation.

As night fell, a handful of activists showed up for a planned demonstration that failed to materialize. Police were nowhere to be seen.

In MacArthur’s unfenced northern half, life unfolded as it did on most other Friday evenings — groups of children and young men kicked soccer balls, a group of older men played a game of sidewalk craps, and vendors sold hotdogs, corn and ice cream from pushcarts.

About 10 tents were pitched in the park north of Wilshire Boulevard — far fewer than in previous weeks, when the corner of South Alvarado Street and Wilshire was crowded with tents and other makeshift dwellings.

Weeks ago, in late September, a notice announcing the impending closure sparked fears that the move would result in conflict between authorities and people living in the park and their advocates.

Many pointed to the violent crackdown in March, when police faced off with protesters and people living in Echo Park, which was also scheduled to be cleared of all people and closed temporarily.

But unlike that March closure, officials made sure to give the public advance notice and provided people living in MacArthur Park with ample time to comply with the order, L.A. Councilman Gil Cedillo previously told The Times.

City officials have billed the project as a “rehabilitation,” and said the closure is limited to the portion of the park south of Wilshire Boulevard.

The city’s Department of Recreation and Parks plans to use the closure to catch up on maintenance put off by the pandemic.

The project will cost $1.5 million and include upgraded lights, replanted lawns, repairs to irrigation and new park benches.

Cedillo told The Times he expects the park to reopen in January. All fencing and barricades will be removed.

As twilight sunk into night, at least one of MacArthur Park’s residents said he’d been offered housing but wasn’t ready to leave the independence and freedom of living on his own terms.

The 56-year-old declined to give his name but said he was known around the park as “John the Merciful.”

John spoke with The Times in the park’s northern half and said he’d been living there for about a year after suffering a serious hip injury that has left him unable to get around without a wheelchair.

Since living at the park, he’s come to value the sense of camaraderie among the encampment’s residents, he said. However, he acknowledged there are dangers, such as when four young gang members who believed he was selling drugs demanded he pay them “rent.”

He protested, and the gang members beat him up in his wheelchair, he said.

Rats are also a serious enough issue that park residents haven’t been able to store food in their tents.

And he’s noticed the flow of people out of the park, residents leaving for shelters, other temporary housing or for other encampments in the city.

“I guess I just procrastinated,” he said, “but I like being alone.”