Jamaal Lascelles has described the “goosebumps” moment Amanda Staveley called him to confirm the Newcastle takeover was happening, after needing to double-check who she was because he did not have her saved in his phone.

Speaking exclusively to Sky Sports News for the first time since the takeover – backed by Saudi Arabia’s Public Investment Fund – the Newcastle skipper says the squad are taken aback by what has happened but “excited” to prove themselves.

Lascelles met Staveley and her co-owner and husband Mehrdad Ghodoussi at Newcastle’s training ground on Monday but his first interaction with Staveley was a surprise phone call 30 minutes before the announcement last Thursday.

“I was sat at home with my kids and my partner and my phone rang. It was Amanda. I was like ‘Amanda who?” He told Sky Sports News.

“I didn’t have her number saved. Then she was like ‘Amanda Staveley’. So I ran into the other room and she just introduced herself and said ‘as captain, I just wanted to let you know the takeover is going to happen in 30 minutes’ time, and we are looking forward to getting started’. It was fantastic.

“I really appreciated it. It made me feel involved. I got goosebumps.

“Then they came in on Monday and showed their appreciation, which was great. They just seemed like real genuine people and want to build a relationship and communication with us, which I think is so important.”

Lascelles and his team-mates had been in “doom and gloom” mode after they lost to Wolves in their last game before the international break, and he insists the players are under no illusions that they are not playing for their futures at St James’ Park.

The skipper also feels empathy for manager Steve Bruce, who was expected to be replaced this week but remains in charge for the visit of Tottenham on Sunday, live on Sky Sports Premier League, but he hopes the uncertainty will be a galvanising factor.

“I guess there is a little bit of uncertainty among the boys, but we see it as a positive; make an impact, impress,” Lascelles said. 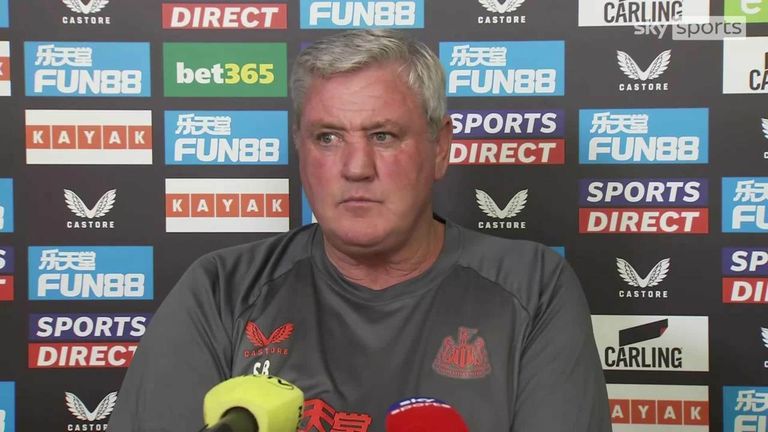 Newcastle boss Steve Bruce has criticised sections of the media after it was confirmed that he will remain in charge for Sunday’s match against Tottenham, despite speculation that he would be sacked

“As people we are all guilty of getting into comfort zones and being repetitive, but when you get such ambitious owners, saying they are going to do this and that, we know it’s a huge opportunity.

“Since I’ve been here, the takeover is all really anyone has spoken about in the city. Now it’s finally happened and it’s fantastic for the people. They want to see their team pushing for trophies, not just ticking over and surviving every year.

“It gives us that mentality shift and extra drive to impress – everyone is playing for a future – and match the ambition. We all want to be a part of it and hopefully it gives us an extra edge to get a result on Sunday.”