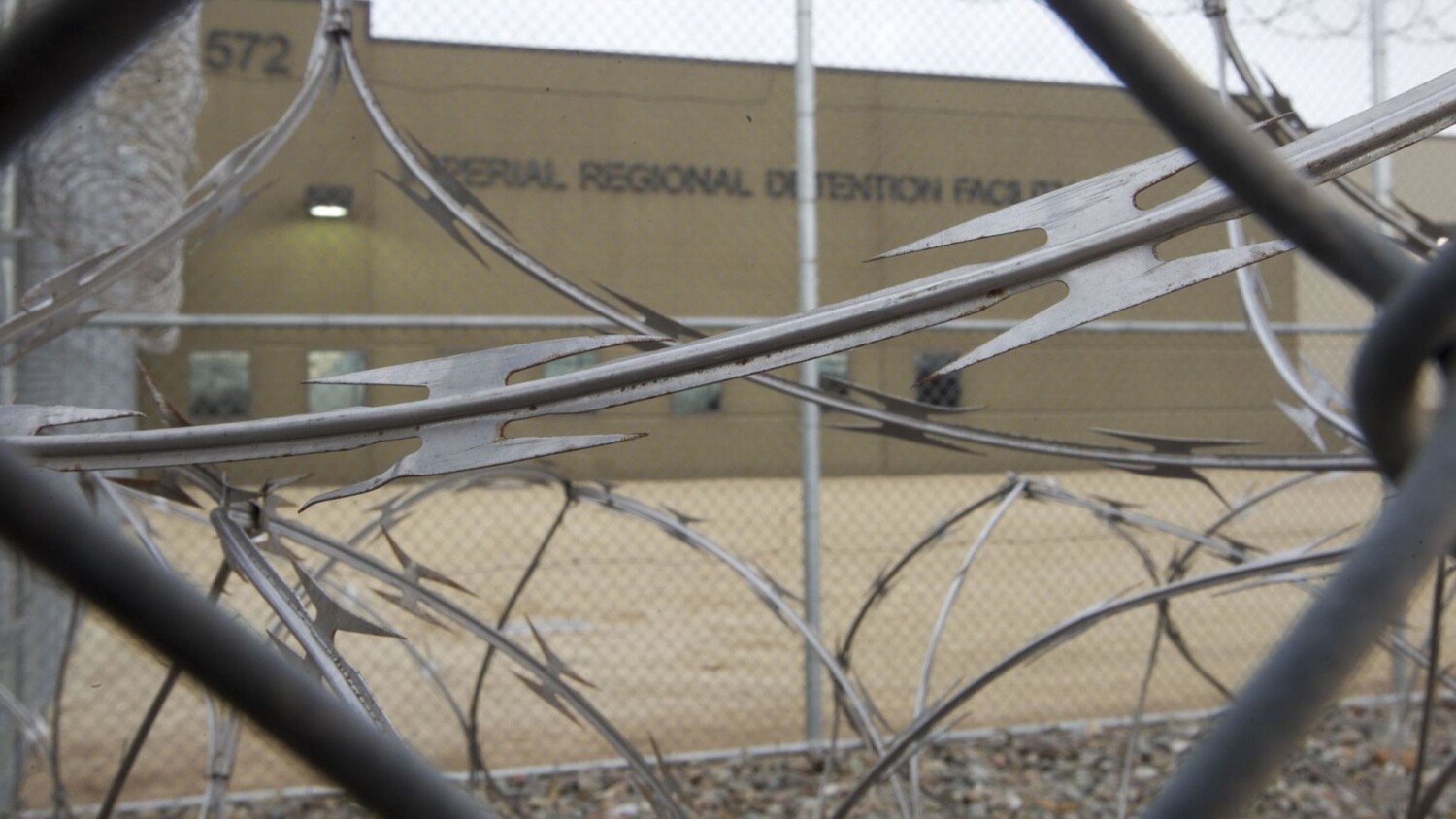 Held in solitary confinement and unable to sleep, Carlos Murillo Vega spent his days pacing around the cell with walls so close he could almost touch them both with arms outstretched.

Murillo was born in Mexico and raised in Holtville, a California town near the Mexican border. He says he is a U.S. citizen but lacks the necessary paperwork to prove it. After being detained by immigration authorities in December 2019, he thought the situation would be resolved within weeks. Now Murillo, 40, is suing the private detention company that held him in isolation for more than a year.

The lawsuit was filed Thursday by the California Collaborative for Immigrant Justice and other groups in the U.S. District Court for the Southern District of California against the Management and Training Corp., a Utah-based private prison company. It’s the first such case under a new California law that allows people to sue private detention center operators for failing to comply with the standards of care outlined in the facility’s contract.

When he arrived at the Imperial Regional Detention Facility in Calexico, Murillo alleges in his suit that an employee had offered him a choice about where to be housed: general population or protective custody. The employee warned that general population was more dangerous. Murillo, grateful for the advice, accepted the offer of protection.

“What followed was a Kafkaesque nightmare of isolation, abuse, and callous disregard for Mr. Murillo’s physical and mental health,” the lawsuit states.

When Assembly Bill 3228 passed in 2020, supporters hailed it as the first of its kind. Detainees could previously sue the federal government for damages over civil rights abuses, but the Federal Tort Claims Act does not apply to private companies. The new legislation cemented a clear path to bring similar claims against those companies under state tort law and clarified the standard of care that must be provided.

Representatives for the Management and Training Corp. did not immediately respond to a request for comment. Last year, after AB 3228 was signed into law, spokesman Issa Arnita said the company was committed to the highest level of care as detailed in the U.S. Immigration and Customs Enforcement’s performance standards. Arnita said Thursday that he could not comment on litigation.

“This was the case before AB 3228 was signed, and it continues thereafter,” Arnita said. “There’s nothing more important to MTC than to treat the men and women in our care with dignity and respect.”

Murillo is seeking damages “in excess of $75,000″ for his injuries, which he maintains include physical pain, emotional distress, psychological trauma and mental deterioration.

Lisa Knox, legal director at the California Collaborative for Immigrant Justice, said the law offers advocates a tool to build a record of abuses taking place in California detention centers.

“The more money the companies have to spend fighting these lawsuits, the more their bottom line is impacted,” she said. “We really see this as the first case of hopefully many.”

Knox declined to say how or why Murillo was arrested by ICE, or how he was released from custody. ICE did not immediately reply to a request for comment.

Murillo says he is entitled to U.S. citizenship through his late U.S.-born military veteran father. Immigration lawyers are separately fighting his deportation case.

In addition to the Imperial facility, Management and Training Corp. has contracts with ICE to operate four other detention centers. It is the third-largest for-profit prison company in the country.

ICE requires contractors to follow its own minimum requirements for the treatment of people in custody. Those standards allow for solitary confinement for disciplinary reasons and for administrative reasons, such as when a person presents a significant threat to safety or security.

In limited circumstances, facilities can use administrative segregation as a means of protective custody, when “there is documentation and supervisory approval” that segregation is necessary “and that no reasonable alternatives are available,” according to the standards.

Detainees in the general population live in a dormitory with access to a recreation yard, religious programming, a library and other services. Those in segregation spend 23 hours a day alone in a cell. People held in immigrant detention are not being charged with a crime but waiting to find out whether they will be allowed to stay in the country or be deported.

Though he wasn’t being disciplined, Murillo lived in the same conditions as those who were. Unable to visit the library, he read the Bible repeatedly, he told The Times, returning frequently to Isaiah 43:26: “Put me in remembrance. Let us plead together. Set forth your case, that you may be justified.”

Murillo viewed that verse as God answering his prayers for release.

In October 2020, 10 months after he was first detained, Murillo and the other men in protective custody were moved to an empty dormitory while their unit underwent maintenance. For nearly two weeks, he was able to socialize, call his family and use the library.

After returning to segregation, Murillo’s mental health sharply declined, the lawsuit states. He couldn’t sleep, frequently felt hopeless and sometimes contemplated suicide. He became paranoid that staff were playing mind games with him.

Murillo repeatedly asked to be moved into a general population dormitory. But, according to the lawsuit, facility staff denied the requests, citing his original choice to be placed in protective custody.

Murillo’s lawyers contend that the Management and Training Corp. violated three of the ICE care standards: requiring that an individualized assessment be made in each case for detainees in protective custody; ensuring detainees in administrative segregation have access to services available to the general population; and conducting a review once a week for the first month of segregation and then every 10 days thereafter.

Immigrant advocates have long complained that private contractors freely violate the federal government’s minimum standards of care. Inspectors at the Department of Homeland Security found in 2019 that ICE often doesn’t hold detention facilities contractors accountable for failing to meet those standards and had imposed financial penalties only twice in nearly three years.

Last year, inspectors found the Imperial facility in violation of detention standards, including what it described as “serious violations” related to its use of administrative segregation.

Inspectors said the facility operators were “using administrative segregation as a long-term solution for detainees in protective custody and overly restricted detainees by not offering privileges similar to those offered to detainees in general housing units.”

In response to the report, ICE officials said they would work with the facility comply to maintain compliance with detention standards.

“Typically, detainees who request protective custody have concerns about being in the general population due to gang affiliation, gang drop out, or a criminal conviction involving a minor,” an ICE representative stated in comments at the end of the report. “Detainees at the IRDF do receive segregation reviews at appropriate intervals.”

Last January, the California Department of Justice also issued a report condemning the Imperial facility for keeping people in administrative segregation “indefinitely.” Three detainees who began in voluntary protective custody reported to California DOJ inspectors that their requests to be returned to the general population had been denied without explanation.

“Imperial treats detainees in administrative segregation as restrictively as those in disciplinary segregation, submitting detainees in protective custody to harsh and isolating conditions,” inspectors wrote.

Murillo’s lawyers say none of these reports had any effect on the conditions at the Imperial facility before his release in February.

Since Murillo was released, he says he has not fully recovered from the effects of the prolonged isolation. He has difficulty concentrating and gets anxious in small spaces, even his own bedroom. He frequently has nightmares and wakes up in a panic.

He sees bringing the lawsuit as a duty that extends beyond justice for himself.

“I’m not the first person that’s gone through this and I’m not going to be the last,” he said. “When there’s money to be made, they’re always going to bend the rules.”

Previous Post
4 Things You Can Spend Money on That Will Actually Make You Richer
Next Post
Liverpool News Roundup: Reds’ target linked with a move to Bayern Munich, Frenchman says Jurgen Klopp “loved” him, and more