Further signs of stress emerged in China’s indebted real estate sector after Modern Land China Co. missed payment on a dollar bond, ahead of a test later this week for China Evergrande Group on an overdue coupon.

Modern Land didn’t repay either the principal or interest on a $250 million bond due Monday, according to a filing to the Singapore stock exchange Tuesday morning. The company is working with its legal counsel Sidley Austin and expects to engage independent financial advisers soon, the filing said.

China has clamped down on the indebted real estate sector, making it difficult for developers to refinance as they face falling home prices and sales. Multiple developers have defaulted this month, though Evergrande made a coupon payment last week before a grace period expired.

The focus now turns to the end of a grace period on another Evergrande dollar bond later this week. Still, the company’s creditors are bracing for an eventual debt restructuring that could rank among the largest ever in China. Economists have again lowered their growth forecasts for China over the coming year amid power shortages and a worsening property market downturn, a Bloomberg survey shows.

Gross domestic product will likely expand 8.1% in 2021 and 5.3% next year, according to the median estimate in the latest quarterly survey by Bloomberg. That’s down from a previous projection of 8.4% and 5.5% respectively. Fourth-quarter GDP growth forecasts were slashed by nearly 1 percentage point to 3.5%.

Ronshine China Holdings Ltd. paid the $30.2 million of interest due Monday on a dollar bond, according to a media representative for the company. It wired the funds on Oct. 20 and the bond’s custodian confirmed the same day that it received payment, the representative said.

Former state researcher Jia Kang said he believes that Evergrande is not insolvent and the crisis will be resolved according to market principles, in comments made in an interview with the official Changjiang Daily newspaper about the implication of a property tax for the real estate industry.

“The Evergrande incident is a short-term problem,” Jia said in the article posted on his WeChat account Tuesday. “It is pretty clear now that it is not insolvent.”

The developer “should deal with its own asset portfolio in accordance with commercial principles,” he said, adding that “the domino effect on the property industry from the Evergrande crisis can be avoided.”

He also said the possibility of other enterprises acquiring equity stakes in the developer shouldn’t be ruled out. Jia, now a consultant, was previously director of the fiscal science research institute at the Ministry of Finance.

Chinese borrowers have defaulted on a record of at least $8.7 billion of offshore bonds so far this year, with the real estate industry accounting for one-third of that amount. That’s come as authorities clamp down on excessive leverage in the real estate sector.

The nation’s developers with the worst balance sheets are getting crushed by a spike in borrowing costs, a phenomenon that’s intensifying as bills come due this month. 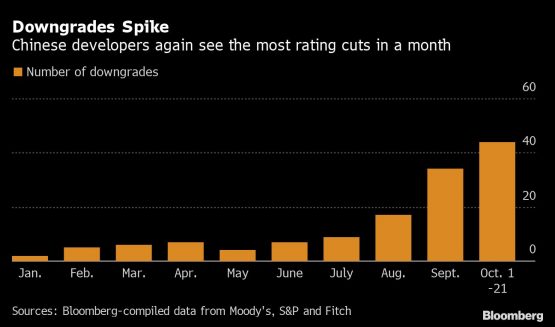 Credit-rating cuts for Chinese developers have accelerated further in October, hitting a record high for a second straight month. There were 44 reductions by Moody’s Investors Service, S&P Global Ratings and Fitch Ratings as of October 21, after 34 downgrades for all of September, according to Bloomberg-compiled data.