DeMar DeRozan scored 26 points – including 11 in the fourth quarter – and the visiting Chicago Bulls defeated the Toronto Raptors 111-108 on Monday night for their best start to the season in 25 years.

DeRozan, a former Raptor, made three important jump shots late in the fourth quarter after the Raptors had cut the lead to two. Toronto’s Fred VanVleet missed a three-point attempt in the final second that would have tied the score.

Zach LaVine added 22 points for the Bulls, who have won four games in a row to open the season. Remarkably, this is Chicago’s first 4-0 start since the 1996/97 season and the very first time 2021 All-Star LaVine has won four consecutive games during his career in the NBA.

The Bulls led by as many as 20 points in the third quarter and were ahead by 12 points entering the fourth. Toronto cut the lead to four on VanVleet’s layup with 1:04 to go but DeRozan made two free throws with 24 seconds left.

A dunk by Barnes after a Bulls turnover trimmed the lead to two with 14.4 on the clock before Vucevic made one of two free throws before VanVleet missed at the buzzer. 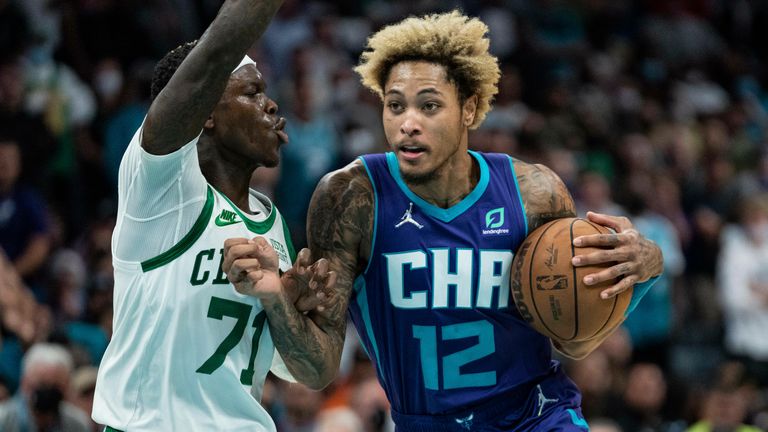 Highlights of the Boston Celtics’ clash with the Charlotte Hornets

After Dennis Schroder tied it at 129 on a 3-pointer with 2:41 left in overtime, Brown added a trey of his own and followed it with an emphatic dunk at the 1:21 mark. Schroder added four consecutive free throws and Tatum made two to put the game away.

Tatum dished eight assists while Brown grabbed nine rebounds. Schroder finished with 23 points, eight assists and six rebounds for Boston, who had dropped two in a row to open the season before a 107-97 win at Houston on Sunday. 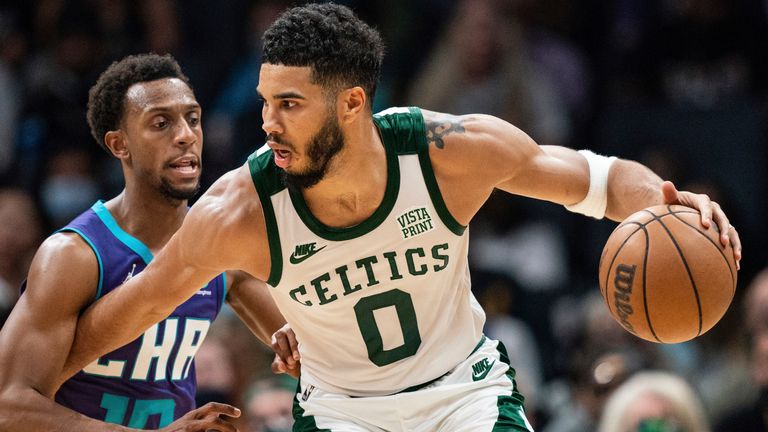 Jayson Tatum scores 41 points, eight assists and nine rebounds for the Boston Celtics, to halt the Charlotte Hornets’ winning start to the season.

Down by two at halftime, the Hornets fell behind by six late in the third quarter before closing on an 11-2 run to lead 97-94 entering the fourth. Tatum’s three-pointer at 10:35 of the fourth brought the Celtics within one before Charlotte opened a 12-point lead.

The Celtics erased the gap and went ahead 120-119 on a Robert Williams III alley-oop dunk with 1:42 remaining. Ball answered with a pull-up trey with 1:30 on the clock before Tatum tied it with a pair of free throws at the 1:11 mark.

Ball missed a step-back three with 51.7 seconds left, and Boston’s Marcus Smart missed a triple of his own with 27.4 to go. After a timeout, Smart stole the inbound pass from Hayward, and Boston called a timeout with 8.2 seconds remaining.

On the play, Charlotte stripped the ball but were unable to get a shot off before the end of regulation.

Performance of the Night: Jimmy Butler 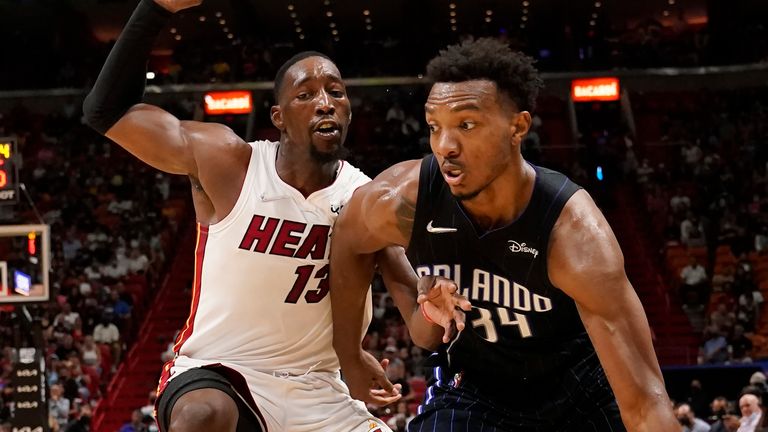 Highlights of the Orlando Magic’s visit to the Miami Heat

Jimmy Butler scored 24 of his 36 points in the first half to fuel the host Miami Heat to a 107-90 victory over the Orlando Magic.

Butler made 15 of 21 shots from the floor and added five steals to help the Heat defeat the Magic for the sixth time in the last seven meetings.

Butler’s sharpshooting performance on Monday was significantly better than his previous game. He made just 7 of 22 shots in Miami’s 102-91 overtime loss to the Indiana Pacers on Saturday.

Bam Adebayo collected 16 points and 13 rebounds to record his third straight double-double to begin the season.

Markieff Morris had 16 points off the bench and Kyle Lowry had nine points and eight assists in his return from a one-game absence due to an ankle injury.

Franz Wagner and Jalen Suggs each scored 15 points and Cole Anthony and R.J. Hampton added 12 apiece for the Magic, who were playing on back-to-back nights.

Dunk(s) of the Night: John ‘The Baptist’ Collins 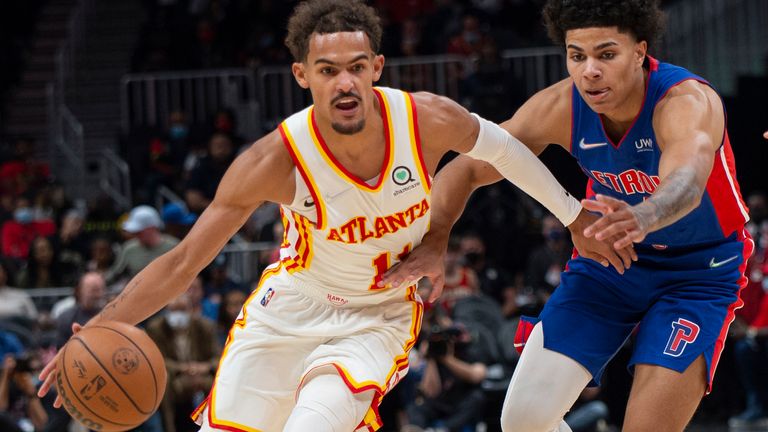 Highlights of the Detroit Pistons’ visit to the Atlanta Hawks

Trae Young bounced back from a subpar shooting performance to score a season-high 32 points to lead the Atlanta Hawks to a 122-104 win over the visiting Detroit Pistons.

Young did most of his damage by driving to the basket and made 13 of 21 from the field. Only two of his baskets came from distance. He added nine assists and had only two turnovers.

Atlanta’s John Collins sat out much of the first half because of foul trouble, but wound up with 22 points — pushing him over the 4,000-point career mark — and included two thunderous one-handed slams.

Cam Reddish came off the bench to score 17 points, including a trio of three-pointers, and Bogdan Bogdanovic and Kevin Huerter both scored 14.

Detroit got 21 points each from Kelly Olynyk and Saddiq Bey – season highs for both — and 18 from Josh Jackson. The Pistons played without Jerami Grant, who had 24 points against the Bulls in the season opener and was out with a left elbow infection.

Giannis close to triple-double against Pacers 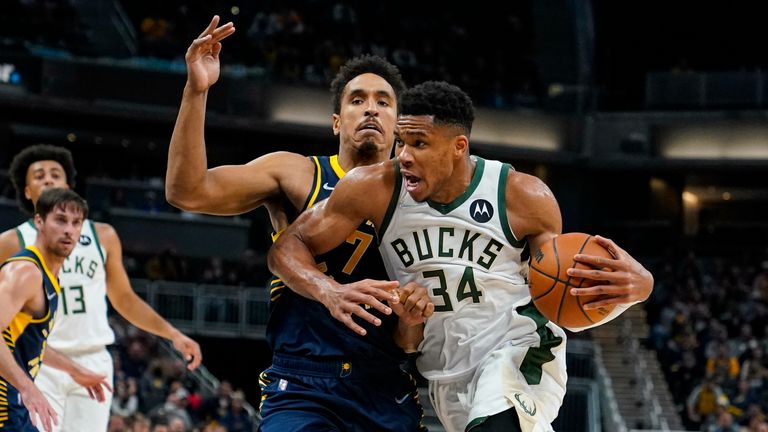 Highlights of the Milwaukee Bucks’ trip to the Indiana Pacers

Giannis Antetokounmpo scored 30 points, grabbed 10 rebounds and dished nine assists, Khris Middleton added 27 points, and the Milwaukee Bucks held on for a 119-109 win over the Indiana Pacers in Indianapolis.

An 11-2 run that sent Milwaukee into halftime and extended into the early third quarter gave the Bucks a double-digit-point lead for most of the second half. The gap grew to as many as 18 points.

Milwaukee capitalised on 19 Indiana turnovers, converting them into 22 points. That made a key difference with the Pacers getting only six points off the Bucks’ 14 turnovers.

Indiana fought back in the fourth quarter to cut the deficit to as few as five points, fuelled by an 11-1 scoring run over 3:50.

Domantas Sabonis scored six of his 21 points during the run, and rookie Chris Duarte added the other five. Monday marked the third time in four games on the season Sabonis has recorded a double-double, grabbing a game-high 13 rebounds.

Duarte continued his strong start to his first season, finishing with 18 points. He has scored at least 15 in each of his first four professional games. 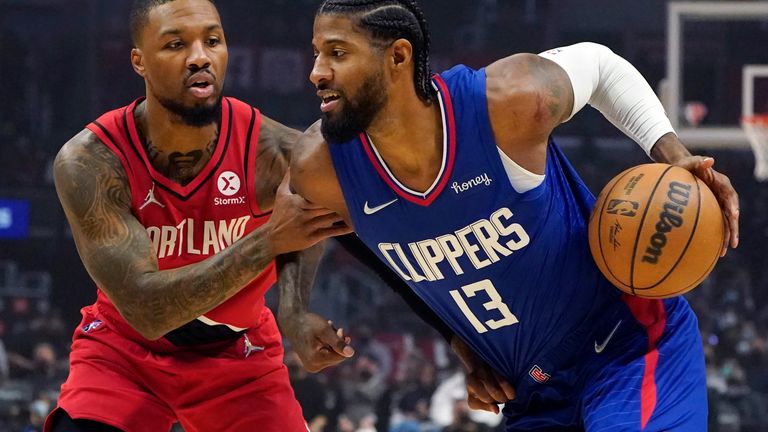 Highlights of the Portland Trail Blazers’ trip to the LA Clippers in Week 2 of the NBA.

Hot-shooting Luke Kennard scored 23 points off the bench to help the Los Angeles Clippers roll to an easy 116-86 victory over the visiting Portland Trail Blazers.

Kennard made 8 of 10 field-goal attempts, including 6-7 from three-point range, as Los Angeles notched their first win of the season in its third contest.

CJ McCollum scored 20 points for Portland, which committed 30 turnovers while losing for the second time in three games under new coach Chauncey Billups.

Anfernee Simons tallied 12 points off the bench and Damian Lillard had just 12 on 4-of-15 shooting while missing all eight of his three-point attempts.

Lillard is averaging just 17 points through three games after scoring at a 28.8 clip last season while earning second-team All-NBA honours. He is shooting just 36 per cent from the field and is a woeful 2-of-24 (8.3 per cent) from deep. 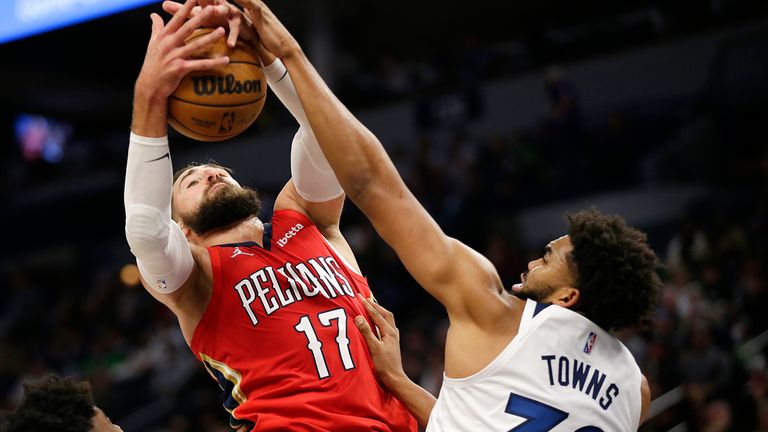 Highlights of the New Orleans Pelicans’ trip to the Minnesota Timberwolves

Brandon Ingram scored 27 points and Jonas Valanciunas had 22 points and 23 rebounds as the New Orleans Pelicans got their first victory of the season by defeating the Minnesota Timberwolves 107-98 on in Minneapolis.

Devonte’ Graham added 21 points and Nickeil Alexander-Walker had 17 as the Pelicans bounced back from a 96-89 loss at Minnesota on Saturday. They turned the ball over 20 times, but that was a significant improvement over the franchise record-tying 30 they committed on Saturday.

Karl-Anthony Towns had 32 points and 14 rebounds, Anthony Edwards scored 28 and Patrick Beverley added 13 for the Wolves. 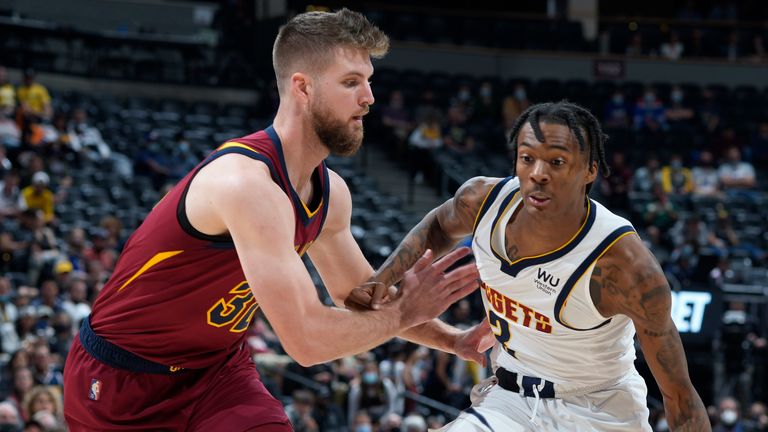 Highlights of the Cleveland Cavaliers’ visit to the Denver Nuggets

Collin Sexton scored 14 points, Lauri Markkanen had 12 points – including a huge dunk over reigning MVP Nikola Jokic on the very first play of the game – and rookie Evan Mobley amassed 10 points and eight rebounds for Cleveland.

Jarrett Allen on Feb 24, who was the first to do it since…

Jokic finished with 24 points and 19 rebounds, Aaron Gordon and Will Barton scored 12 points apiece and Michael Porter Jr. had 11 points for Denver. The Nuggets committed 22 turnovers.

Denver trailed for most of the game, and a tough start to the fourth quarter doomed the Nuggets as the Cavs pulled away for good. 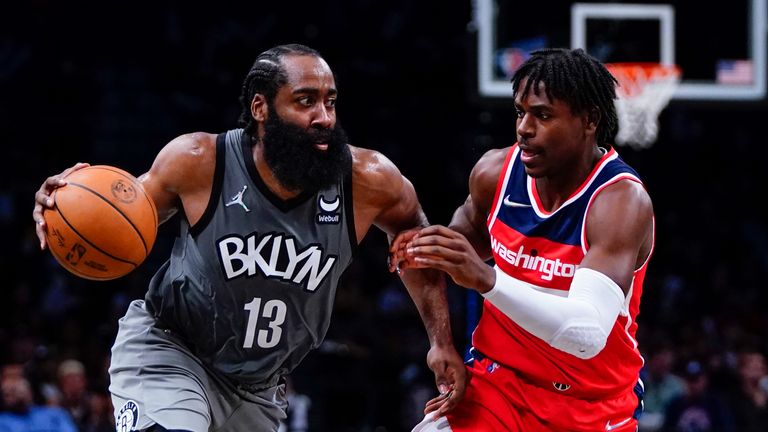 Highlights of the Washington Wizards’ trip to the Brooklyn Nets

Kevin Durant scored 25 points and the Brooklyn Nets led virtually the entire way in a 104-90 victory over the visiting Washington Wizards in New York.

The Nets bounced back from getting outplayed in a 15-point loss to the Charlotte Hornets in Sunday’s home opener and turned in their best defensive showing of the young season.

Durant followed up a 38-point showing by shooting 9 of 17 from the field in 35 minutes along with adding eight rebounds and four assists. Sixth man Patty Mills hit five three-pointers and finished with 21 points, Bruce Brown contributed 14 in place of a resting LaMarcus Aldridge and James Harden chipped in 14, nine assists and six rebounds as the Nets shot 42.6 per cent and survived missing 25 of 35 three-point tries.

Bradley Beal returned from a one-game absence due to a hip contusion and led the Wizards with 19 points. Beal, however, shot 8 of 22 from the floor and the Wizards shot a dreadful 34.7 per cent after shooting 52 per cent in Friday’s overtime win over the Indiana Pacers.