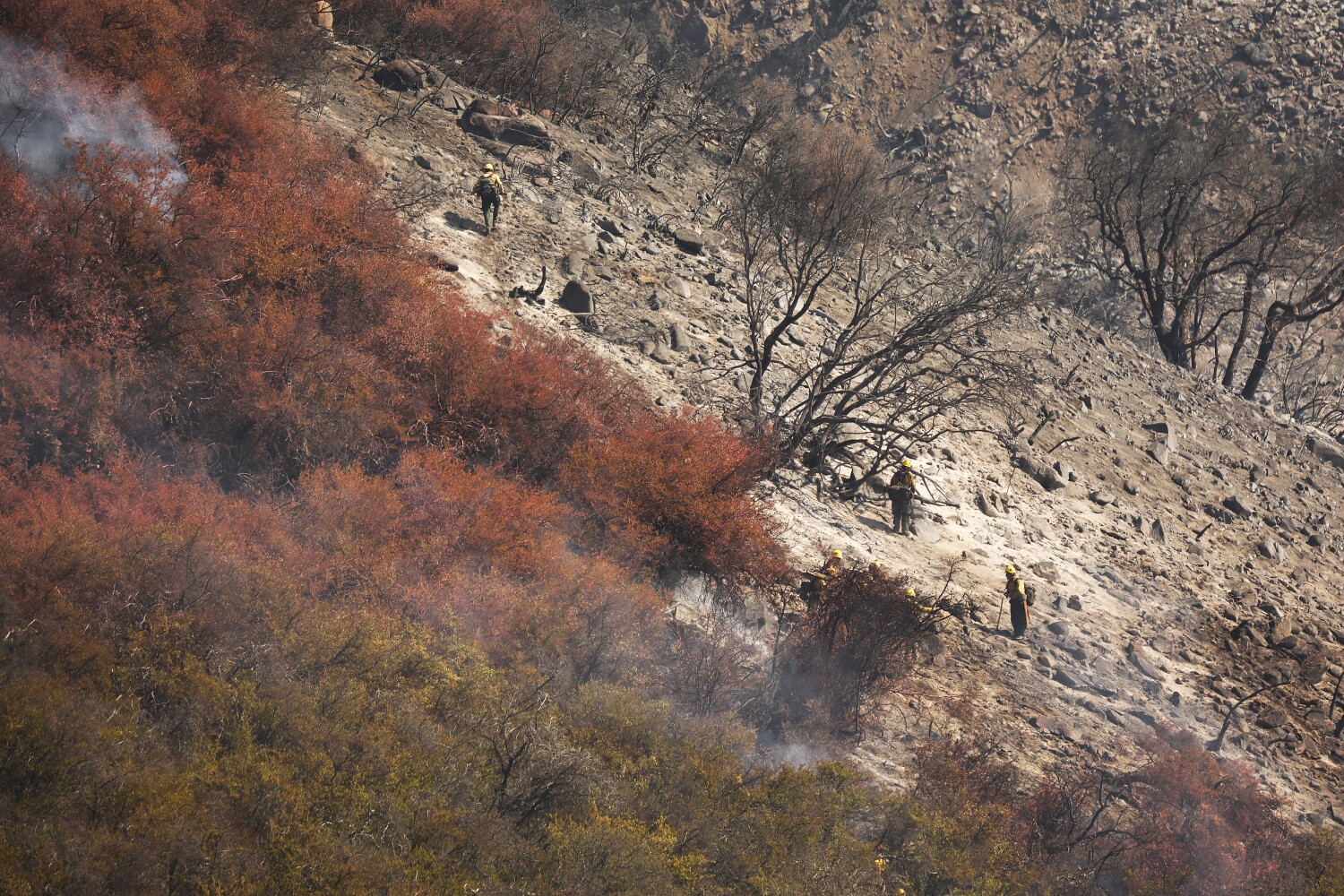 Crews reopened a stretch of the 101 Freeway days after the Alisal fire in Santa Barbara County shut it down as firefighters made significant progress on the blaze ahead of dangerous weather conditions.

Containment of the fire burning in the Santa Ynez Mountains rose to 41% by Friday morning — up from just 5% the previous day. The blaze, which ignited Monday afternoon, has burned 16,901 acres, growing only about 100 acres in the last 24 hours.

Despite the gains, forward progress has not been entirely stopped, and evacuations remain in place as more than 1,700 firefighters combat the flames. Authorities confirmed the blaze has destroyed three homes and two outbuildings, while roughly 100 residences remain threatened.

Winds, which have spurred the fire since it ignited near Alisal Reservoir, were calmer than had been expected Thursday, allowing firefighters to use both aerial and ground attacks on the blaze, officials said.

On Thursday night, crews reopened a roughly 20-mile stretch of the 101 Freeway and parallel rail lines that been shuttered since shortly after the fire began.

The temporary closures allowed “resources to really be able to get in there and find all the heat, get [it] out and then get rid of all the hazards, so that they could open that up,” Allison said.

The Santa Barbara division of the California Highway Patrol asked motorists in a tweet “to remain vigilant of emergency crews,” who will continue to battle the active fire near the major thoroughfare.

Much of the progress Thursday was made on the northern and southern ends of the fire, Allison said. Steep, challenging terrain in the Los Padres National Forest has made it difficult to access some pockets along the western and eastern flanks, she added.

Weather officials this week warned that the next few days will bring a chance of elevated fire weather, including a spike in temperatures, fearsome winds and bone-dry humidity. A red flag warning on the critical conditions went into effect 6 a.m. Friday and is slated to last through 8 p.m. Saturday for much of Los Angeles and Ventura counties.

The Santa Anas are expected to bring 30 to 45 mph gusts across a range of areas, including the Malibu Coast, the Santa Monica Mountains and the San Fernando and Santa Clarita valleys, along with some isolated gusts as strong as 55 mph.

Peak gusts are expected Friday morning into the early afternoon. Humidity will likely plunge into the single digits or low teens, while temperatures surge between 80 and 90 degrees across coastal and valley areas, according to the National Weather Service.

It’s the kind of weather fire officials fear most — when a single spark can quickly become a wildfire that grows out of control. The region’s record-hot summer and worsening drought only helped to bake the state’s vegetation and prime it to ignite.

“We’ve seen it happen before with wildfires during Santa Ana events,” Sirard said. “If any fire breaks out, it could bring extremely dangerous conditions with rapid spread and very intense activity.”